NTDs according to the World Health Organisation (WHO) are a group of 17 diseases common in middle and low-income countries particularly in continents like Asia, the Americas and Africa. Nigeria is the 7th most populous nation in the world and according to UNICEF, 70% of the population lives on less than a $1 a day. This comes with several challenges as Nigeria is laden with 25% of the burden of NTDs in Africa. Due to the deep-rooted poverty in about 51% of the population, about 10million Nigerians are at risk of contracting NTDs or already have untreated cases of NTDs. A large share of the NTDs recognized by the WHO have their abode in Nigeria. Notable ones include; trachoma, buruli ulcer, Human African trypanosomiasis, Dengue fever, Schistosomiasis, lymphatic filariasis, onchocerciasis and soil transmitted helminthes among others.

The prevalence of NTDs in Nigeria stems from the extreme levels of poverty in the country and this really beggars the question; why must Nigeria care? A rhetorical question of some sort, but the answer is actually not far-fetched. The moment we realize the negative impact of these neglected diseases, we will see the reason we need to care. The economic impact of NTDs cannot be overemphasized, but it is ironic that the economic burden of these diseases is undervalued. The high cost of drugs to treat NTDs also poses a challenge in the elimination of several neglected diseases. Pharmaceutical companies are less likely to commit large funds in the research and development of drugs required to combat NTDs, especially as their target audience is largely poor and unable to afford the high cost of drugs.

Blue Gate Initiative therefore providing services in the total elimination of NTDs through the following; 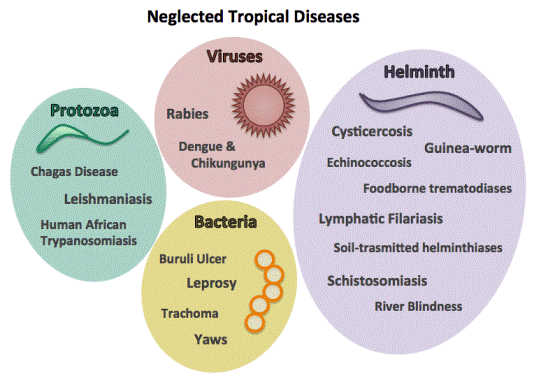